Sophie Michael is showing in a screening, part of Ericka Beckman: Image games – work in context at Tate Modern.

This screening includes a number of recent works by a new generation of artists chosen by curator Isobel Harbison to be viewed in the company and context of Beckman’s oeuvre. In diverse ways, they exploit different children’s games, team sports, board and video games as structural or framing mechanisms, or narrative devices. Different works relate to particular aspects of those of Beckman’s, excerpts of which are shown during the screening as interludes. Works by Gil Leung and Sophie Michael look at children’s ‘developmental’ exercises as platforms for creativity, error and adult judgment. Work by Mary Reid Kelley condenses aspects of Greek drama and mythology with scenes of the church volleyball tournaments she encountered as a child, where gymnasium architecture becomes a labyrinthine space for violent sacrifice and bodily need. Yemenwed’s ‘commercial breaks’ show female protagonists venturing through the virtual worlds and surreal architecture of airbrushed advertising spaces and Helen Benigson’s work adapts the virtual worlds of video games as a platform for her female protagonist to play out pursuit and survival. Ed Atkins’s early work shows how camera movements might treat and condense a real landscape into a claustrophobic inner space in order to implicated the viewer in this pursuit.
The screening concludes with Beckman’s most recent work, Tension Building, 2012, and be followed by a panel discussion with Ericka Beckman, curator Isobel Harbison and invited guests, contextualising her practice across generations.
Programme duration 70 min 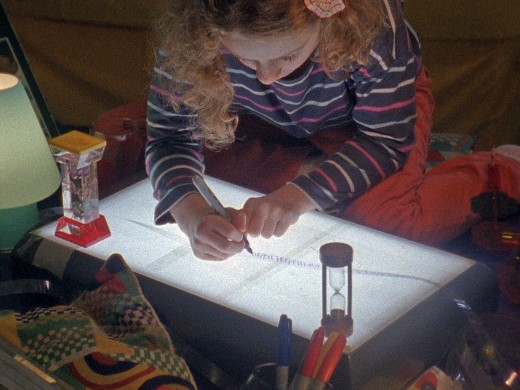