Doug Fishbone presents a one off performance of his piece ‘You Call This Living?’ on Friday 28th April 7pm.

Doug Fishbone’s video and performance works place the viewer in an slightly awkward position. His monologues use structures that seem to evoke contexts and strategies of various speakers, ranging from bad stand-up comedy, a self-help tape, a session with psychiatrist, a corporate slide show or a guy sitting in a bar next to you. He moves between these ways of speaking, adopting contradictory positions, telling stories, truisms, cliches and racist jokes that feed and loop around each other. With this monologue a series of related images that illustrate, contradict or twist the meaning of his speech, appear behind him in the manner of a news reader or university lecturer, regulated to the pace of his voice.

His position veers wildly from pole to pole, narrating grey areas between our perceived notions of fact and fiction, myth and propaganda, comedy and advertising.
While Fishbone altruistically turns our attention to corporate greed, saving the dolphins and pornography, the work ultimately functions (best) as propaganda for the artist and his sex life. 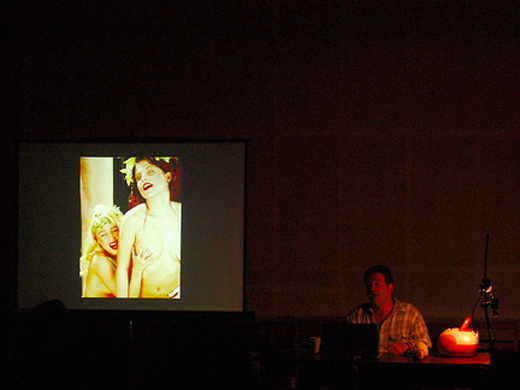