A time has arrived where we can (in theory and almost in practise) listen to any recorded music, from the entire history of recorded music, wherever, whenever, while doing whatever we want.

This has meant our relationship with music is rapidly and fundamentally changing, faster than it has done for many decades.

This is good for numerous reasons.

But a by-product of this is that recorded music will no longer contain the meaning it once held for us. This will entail that it no longer gives us what we need and desire from it.

Once a music has lost it’s meaning it has no value.

The era of recorded music is now passing and within the next decade it will begin to look and sound like a dated medium. Recorded music will be perceived as an art form very much of the 20th Century.

The above notions excite me. This excitement has brought about The17.

The17 rejects all that the era of recorded music had to offer and attempts to embrace the unknown opportunities of what lies ahead.

Please accept my invitation to embrace the unknown opportunities of what lies ahead, in whatever way excites you.

Drummond’s latest performance work, The17, will be performed over a series of dates at the gallery in November and December 2007. 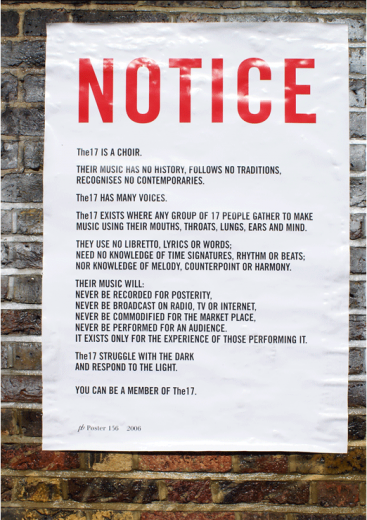